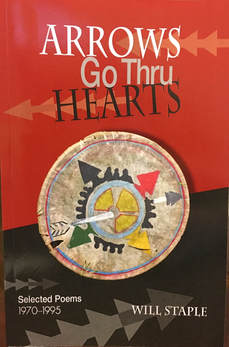 In Arrows Go Thru Hearts - a collection by Will Staple of his published poems from 1970-1995 - readers are offered an edified peek at the evolution of an artist that is at once raw, adventurous, broken, beaming, sincere and shape-shifting. Readers of these poems will hear the changing of one poet’s voice and state of mind, see the altering of style and substance of poetry lived from cabins to canyons, mountains, meadows, zendos and forests, through interactions with friends and lovers who remain, and those that have long departed. (Six Ft. Swells Press, 2017)

Pulitzer prize winning poet, Gary Snyder, says “I have followed Will Staple’s unique, cranky, original poetry since we first met in the sixties…His book, Arrows Go Thru Hearts, has his particular original signature: something is here that belongs to the world of shamanism, deep power, a certain kind of sexual energy, a certain kind of rebellion. His steadiness and commitment to poetry is peerless.”
Purchase Book 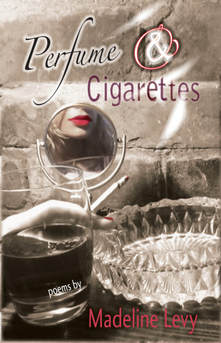 The poems in Perfume & Cigarettes by Madeline Levy come at you like Tom Waits driving a 1957 Cadillac onto the sleek asphalt of night, with only the red glow of taillights sending kisses on the road to everywhere. These poems take us places, somewhere between the proper and the profane, the dive bars and the five-star restaurants. These are poems with wicked grins and sharp edges that will leave a "tiny-sized cut in the back of your heart," and make us believe that "apple pie & cyanide" are a good idea. Madeline Levy is a new and true voice in American poetry who leaves cigarette burns on our crooked wings, yet we still offer to buy her a new pack. (Six Ft. Swells Press, 2015)
​
Purchase Book 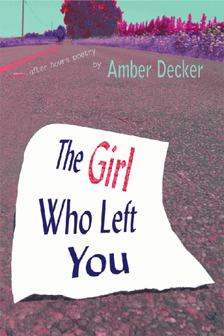 ​The poems in Amber Decker's The Girl Who Left You deliver love and lust on the spot, demanding us to immediately pull over to the side of the road and catch our breath. They are moving, visceral snapshots of a poet's life when she bares all and declares: "that next morning/we wore our bruises/proud as prizefighters." When Amber brings us storms over her landscape, we shake deep inside. When she seduces us, we fall for it. And when she leaves us for good, we never forget it, just like her poems. (Six Ft. Swells Press, 2014)
Purchase Book
Purchase Book
Purchase Book
Purchase Book
Cheap Shots Chapbook Series

​Cheap Shots Poetry Series #1 2005 — Our first book by pirate mates Matt Amott and Todd Cirillo. This book has received much acclaim, probably many breakups, and definitely some new exotic love interests who look better and better as the night tramples on. Tonight, You’re Coming Home With Us is going down in After Hours Poetry history. Cheap Shots Poetry Series #2 2006— Our own Six Ft. Swells darling, Julie Valin, shows her late night sensual side, as well as her ability to belly up to the bar with the best of the rowdy boys. Acclaimed Sacramento poet and literary reviewer for Rattlesnake Review, B.L. Kennedy, says, “I enjoy Valin’s sweet and very cool lyric poems of late-night rhythms and reflection. There is some personal intimacy in her words that slips beneath the reader with the soft loudness of dream.” Cheap Shots Poetry Series #3 2007 – Cocktails & Confessions: A Collection of the Greatest Poems Inspired by Lust & Libations is our first “theme” collection of poems from just-discovered and well-renowned poets all over the Western U.S., including Kim Addonizio and AD Winans. If you ever wanted to read poems that reflect “goodtime evenings of drinking, music, and streetlight love affairs, and/or the painful reality of the morning after and the vague remembrance of what may or may not have occurred in the neon night before” — this would satisfy the craving. Cheap Shot Poetry Series #4, #5 2008 – Six Ft. Swells was ambitious this year and we released two chapbooks simultaneously: Sex on Earth by Christine Irving and Noel Kroeplin, and The One That Got Away by legendary poet, Will Staple.  Sex on Earth is as the title implies–sensual, downright sexy, sometimes naughty and always pleasurable. The editors at Six Ft. Swells still find themselves marveling at Will Staple’s ability to pound out poetic diamonds in The One That Got Away. His poems are at once brilliant and heartfelt with a humorous edge that burns in a good way. Cheap Shots Poetry Series #6 2010  was a fun year. We had the pleasure of putting together a collection of poems centered around one of our most treasured themes–Music. We proudly released Savage Melodies & Last Call Serenades: A Collection of #1 Hits from the Poetry Jukebox. It again features new and seasoned poets who appreciate a great tune at the most opportune moment and can find the words to adequately express that thrill. We were even inspired to make an accompanied CD with mentioned music from the book–everything from Sinatra to Nina Simone, Journey to Massive Attack. It’s the book you read to the one you just brought home on a Saturday night to show your etchings. In-Between – There were two little chapbooks (Quick Shots Poetry Series) in-between those published above that we printed as limited editions. We released these for special 0ccasion readings: Poems from the Nightshift and Lost Valentines.